Contemporary bike culture is blossoming into a mesmerising kaleidoscope of bicycle-related art, craft and graphic design. Small artisans are leading the way while big brands try to cash in on the action. Alice Marsh of Bike V Design leads a discussion recorded in front of a live audience at the Victoria and Albert Museum, bringing together a panel that includes Tom Donhou, a former product designer turned bicycle frame-builder, the founders of The Ride Journal and Boneshaker magazine and James Greig, a graphic designer and author of the Cycle Love blog. In a seasonal podcast special, Jack heads to Balham, Gateway to the South, for the Christmas Fête organised by Vulpine, the London-based cycle clothing company. The Fête brings together the best and most creative British cycling enterprises including The Ride Journal, Artcrank, Michaux Club, Pannier.cc, Marsh-Mallows Cycling Holidays, and Fresh Tripe. In the third and final instalment of the Raleigh mini-season, listeners to The Bike Show share their recollections of Raleigh bicycles they have loved – and loathed. Jack Thurston is joined by broadcaster and artist Ruby Wright and London man-about-town and Raleigh Twenty owner Jean-Marie Orhan. In a podcast-only bonus feature, Tony Hadland shares his thoughts on restoring old, neglected Raleigh bicycles.

Apologies to ‘Fun Run’ Robbie who is of course not ‘Fun Boy’ Robbie at all (or maybe he is?!) and yes, the town of Hawick in the Scottish Borders is pronounced like this. In the first of a two-part feature on the Raleigh Bicycle Company, historian Tony Hadland and Jack Thurston chart the rise of the company from a small backstreet workshop in Nottingham in the mid-1880s to the mid-1950s when it was seemingly unassailable as the world’s biggest bicycle manufacturer.

Tony Hadland is the author of Raleigh: Past and Presence of an Iconic Bicycle Brand. Nick Larsen is founder and creative director at Charge Bikes of Frome in the west of England. Charge is a fairly new company, remarkable for many things and not least the fact that all its products are named after something you would normally find in the kitchen. There’s the Juicer (a road bike), the Spoon (a saddle), the Bowl (a pair of handlebars) and of course The Plug, a simple single speed bicycle that launched the company into the big time a few years ago.

Nick talks candidly about the bike industry, his own motivations and inspirations, where future trends are coming from and the potential of the exciting new technology of ‘3D printing’.

This conversation was recorded live at last month’s Bike V Design night at the Design Museum.

Bicycle polo has been played for more than a century but the ‘hard court’ variety is a relatively new, urban development. Todd, Mat and Rupert of London’s Cosmic Bike Polo team (pictured, above) explain how the sport came about, how it has developed in its short history and how bike polo players are pursuing a DIY approach to innovation in bicycle design. This conversation was part of the Design Museum’s Bike V Design night.

In the first of these touring tips I wrote about Ordnance Survey paper maps (specifically the 1:50k Landranger series) and why I thought these are the most useful and satisfying UK maps for the touring cyclist, and how they can be borrowed for free from public libraries. A few people pointed out OS Maps are also available free online, via Microsoft’s Bing mapping website. This can be helpful when planning a route, especially if you don’t have access to the paper versions.

More and more people are using GPS devices instead of maps. The way I see it, a hand held GPS device has a lot in common with the One Ring of the Lord of the Rings trilogy.

A person wearing the Ring would enter a shadowy world revealing the physical world from a different aspect, and from which physical objects were harder to see… The Ring slowly but inevitably corrupted its bearer, regardless of the bearer’s initial intent.

GPS devices change the way you see the landscape, they conceal as much as they reveal and they will end up enslaving all but the most strong-willed rider. And like bike computers they tend to trick us into to paying more attention to average speed and distance covered than is healthy when touring. It’s far to easy to become a GPS Gollum: a miserable, unthinking slave to the ‘precious’.

That doesn’t mean dismissing computer mapping entirely. One very obvious benefit of computer-based maps is that instead of covering your paper maps in crayon marks, there’s no shortage of websites that will help you draw your routes. There are desktop applications too and though I’ve experimented with RouteBuddy but quickly found its interface very primitive and it kept crashing. In the end I found the BikeHike (free) to have better tools for map-drawing and provides easy access to Google Maps or the Open Cycle Map (a version of Open Street Map made especially for cyclists) and – in a simultaneous smaller window – the OS Landranger map. You can also take a look at Google’s aerial photography which can be handy at times. BikeHike lets you draw your route freehand or do the routing between points itself using Google or Open Street Map (you select which one by clicking on Options). The click-drag editing tool is very handy for making changes to routes, or adapting routes drawn by other people and imported into BikeHike. If you don’t fancy drawing your own route you can always get someone else to do it for you. CycleStreets.co.uk is a great website that will devise three routes to chose from (fastest, balanced and quietest). These websites will calculate distance, show you an elevation profile for the ride and even generate turn by turn instructions.

Google maps are ubiquitous but they’re a very bad idea for planning a bike ride since they are based on a roads database built for motor vehicle satellite navigation. As a result the don’t show useful cut-throughs, canal towpaths and other tracks that are accessible by bicycle but not by car. Using Google maps means disregarding a whole world of motor traffic-free possibilities. Also missing from Google maps are contours showing hills and valleys and all manner of other historical landscape features. A few years ago Mary Spence, the President of the British Cartographic Society, accused the likes of Google maps and Multimap of wiping out history:

Corporate cartographers are demolishing thousands of years of history – not to mention Britain’s remarkable geography – at a stroke by not including them on maps which millions of us now use every day. We’re in real danger of losing what makes maps so unique, giving us a feel for a place even if we’ve never been there.

Once you’ve devised a route that you’re happy with, the best thing to do is save it as a GPX file and save it to your computer. This can be transferred onto a smartphone or the dreaded GPS device mounted onto your bike. Or it can be stored for looking at later or uploaded to the web to share your work with other people. The web has become a huge and really wonderful repository of GPX files out there showing all kinds of routes. Many cycling clubs and CTC local groups publish the routes of their traditional club runs as GPX files, as do organisers of long distance audax rides and sportives. It’s a wonderful resource, and all free. I use GPSies to share routes but there are a many other services like bikeroutetoaster and bikely. It’s always worth keeping a local copy of any GPX files you like the look of just in case these web services shut down and take your data with them.

This brings me, in a very round-about way, back to the subject of digital navigation and GPS devices. The power of the GPS device is beyond doubt. Following a route displayed a little screen on your handlebars is a very efficient way of navigating to a pre-designated route. It’s simply a matter of following a coloured line. But the coloured line can exert too much power over you. If you like the idea of improvising your route as you go along, perhaps because you see something that looks interesting along the way or you find that a road is too busy or a track is muddier than you expected, you’re stuck. Sure, GPS devices can display maps but a two square inch screen makes it very difficult to get a clear overview of what lies all around you. You really need to go back to the paper maps. And of course, if the battery runs out… you’re lost.

If you chose to use a GPS device, another tricky question is which digital basemap to install. It probably came with a basic map installed but this is very unlikely to be much use as, like Google maps, it was designed for car travel. Andy Allan, who devised the Open Cycle Map, sells it as a digital download for £9.99 (other countries besides the UK are also available). There are free OSM-derived base maps at TalkyToaster. An equivalent product from the Ordnance Survey costs well over £100.

If all I ever want to do is stick to a pre-determined, GPS is fine. This can be useful for complex routes involving lots of off road trails and tiny lanes with many twists and turns that can be tricky to follow accurately using a paper map. When I’m touring I prefer to ride more freely, with a basic idea of where I’m going. For this, paper maps are better.

On the few occasions when I’ve attempted to use my Garmin GPS device to plan a route for me (like a car sat nav) I found it sends me down all manner of footpaths and bridleways that are completely impassable on a bicycle. I’m not sure why it insists on doing this but it’s incredibly irritating.

In summary, my experience is that paper maps are best, online mapping is fantastic way of planning routes and sharing them with others. GPS devices are OK if you know you want to stick exactly to a pre-determined route without any exploration and improvisation along the way. But that’s not really touring, is it? Using a GPS device to ‘get you home’ is asking for trouble.

Its clear that I’m quite skeptical about electronic route planning and navigation for touring by bicycle. Maybe it’s still a developing technology. Maybe I’m doing something wrong. Please enlighten me in the comments. 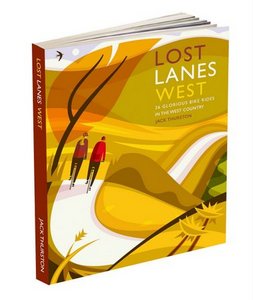